Cruising From the US is Back!

North America, Anywhere · About River or Ocean Cruises
It’s official. Cruising has returned to ports in the U.S.
While many cruise lines have already started sailing with North American guests from offshore ports in the Caribbean and Europe, there’s been no cruising from ports we can drive to.
Until now. Between the end of June and the holiday weekend, three ships have set sail from three different American homeports.
And now the seal is broken, cruises from homeports from coast to coast to coast are scheduled to set sail in a flood that’s restarting a favorite style of travel at last.

First out of the gate: the Celebrity Edge, which, on the last weekend in June became the first large ship to sail with guests from a U.S. port in fifteen months.
The first of the cruise line’s Edge-class ships – with their unmistakable ‘Flying Carpet,’ the orange, cantilevered venue that climbs up and down the side of the ship - sailed out of South Florida. 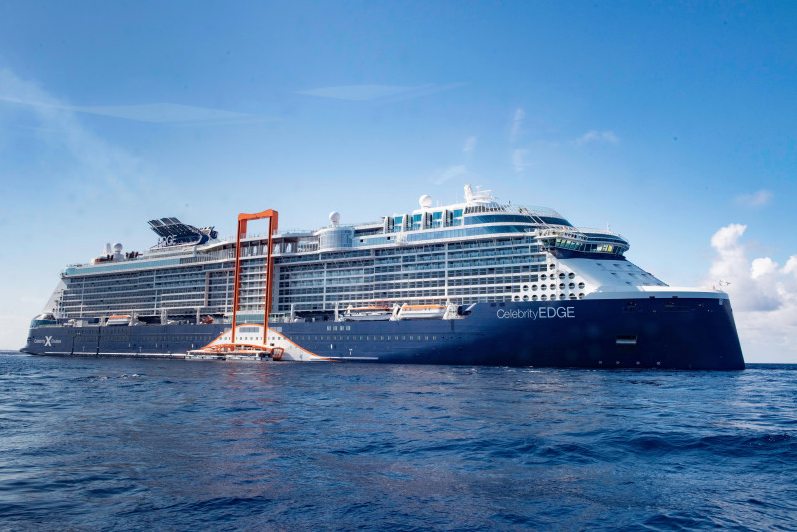 On her first sailing since 2020, the Edge had fewer than 1200 guests onboard. That’s less than half of the ship’s full capacity, to allow for natural social distancing as part of the cruise line’s new health safety measures.
For this landmark cruise, it was appropriately helmed by another gamechanger: the first – and still only – American woman to captain a major cruise ship. Captain Kate McCue set the Edge on course for a 7-day cruise to Mexico and the Bahamas.
“Last March, I started a #HopeFloats tradition of blowing the ship’s horn every evening to let the world know that not only were we safe, but we were thinking of those at home and hoping the same for them,” said Captain McCue just before setting sail. “Now, the sound of a ship’s horn symbolizes rising above hardship. The entire crew is so happy to be back and we can’t wait to welcome our guests aboard!”
With the Edge’s sailing, eight of the 14 ships within the Celebrity Cruises’ fleet now have plans to return to sailing in 2021:
The Edge’s sailing marked a new beginning for its family of cruise lines – and indeed, the entire cruise industry.

Freedom of the Seas: Port Miami

Celebrity’s sister cruise line, Royal Caribbean, made its return to cruise at the beginning of the July holiday weekend.
Freedom of the Seas – which spent her time not cruising since March 2020 undergoing a $120-million transformation including new features and activities - became the first Royal Caribbean ship to sail and the first from Miami, the biggest cruise port in the world. 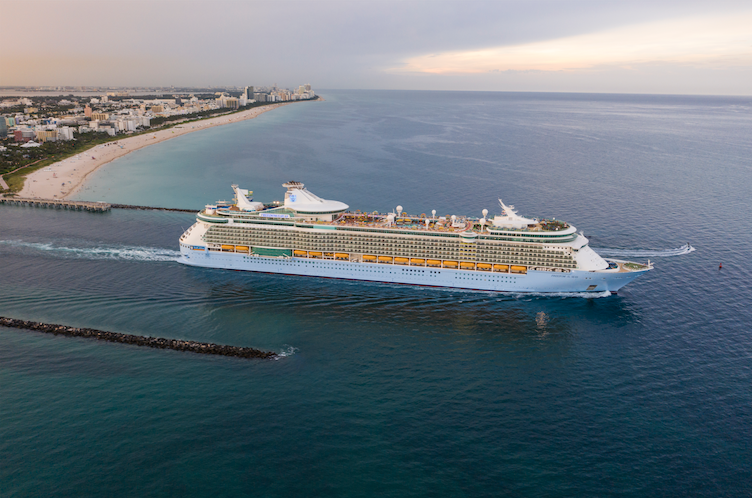 It’s the beginning of a summer-long series of short cruises by Freedom of the Seas ( pictured above and top) to Royal Caribbean’s private island destination Perfect Day at CocoCay and Nassau in The Bahamas, with the cruise line’s president declaring, “Summer family vacations are back, and we are just getting started.”
Freedom of the Seas is the first of ten Royal Caribbean ships to return through August, including Anthem of the Seas in the UK, Serenade and Ovation of the Seas in Alaska, and the brand-new Odyssey of the Seas in Fort Lauderdale. The cruise line will soon announce plans to reintroduce the rest of its fleet around the world by year’s end.

One other cruise line used the occasion of the long weekend to mark its return to cruising.
Carnival Cruise line made its first sailing from Texas, on the Carnival Vista, with ship’s officers, cruise line and local officials leading a “Back to Fun” ribbon cutting ceremony to welcome guests on board. 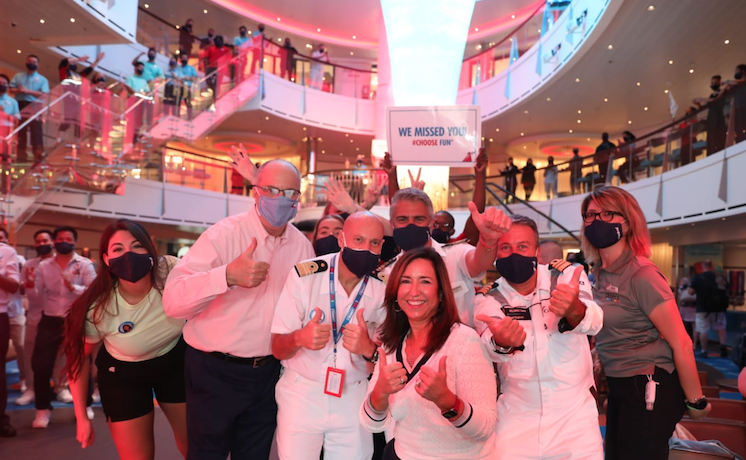 The Vista then set sail from her homeport of Galveston on a weeklong cruise with stops at the private beach resort Mahogany Bay on Roatan Island, Honduras, Cozumel and Belize City.
Another Carnival ship also returned to cruising on the long weekend, with Carnival Horizon sailing from Port Miami the day after the Vista. Carnival Breeze sails from Galveston July 15 and Carnival Miracle kicks off the line’s Alaska season from Seattle July 27. Mardi Gras, Carnival’s newest ship, sails from Port Canaveral July 31. Other ships in the Carnival fleet restart service in August.
Carnival operates from more U.S. homeports than any other cruise line, and says half of Americans –and many Canadians – are within a day’s drive of one of Carnival’s 14 U.S. homeports.
Other lines are returning to cruise from U.S. ports and ports around the world this summer, too. All of them have new measures and protocols in place to keep guests, crew, and residents in ports of call safe in the new, post-pandemic travel world.
Your trusted travel advisor can help you navigate the cruise line’s return to service schedule, which cruise on which cruise line – and when- best suits your travel plans and comfort level. And they can help familiarize you with the new protocols and requirements that will be part of the landscape – and seascape – as we begin to cruise again.

By: Lynn Elmhirst, Producer/ Host, BestTrip TV
Images courtesy their respective cruise lines.
Copyright BestTrip.TV/Influence Entertainment Group Inc or Rights Holder. All rights reserved. You are welcome to share this material from this page, but it may not be published, broadcast, rewritten or redistributed.

5 Reasons to Get Excited About...

Leave your evening gown at home and pack your hiking shoe...

Nothing is more luxurious than when things are extra simp...